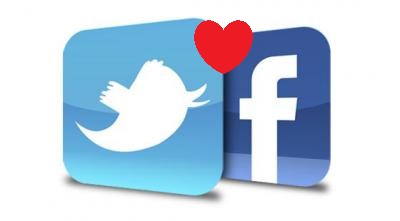 With social media becoming an integral part of our life these days, how can we take advantage of it to get back with your ex?

Let’s get into the details…

If you want to have any chance at all of getting back with your ex successfully, there are certain things that you should NEVER do on your Facebook (Click Here for specific Facebook Tactics to get your ex back) or Twitter account after your breakup:

This is very important.

By changing your relationship status, it will be letting all your friends know that you two just broke up and attract a lot of unwanted comments and questions.

You do NOT need that!

However, I am not saying that just leave it unchanged even after your ex has publicly changed their relationship on Facebook.

There is an option on Facebook that allows you to hide your relationship status.

2.Do not post sad love quotes or anything that shows you are upset over your breakup.

I get it that you are still feeling sad and depressed over your recent breakup or even if your breakup was years ago.

But, that is not an excuse for you to post sad love quotes or any post that says that you are still hurting from your breakup and still misses your ex.

I know what you might be thinking right now: if my ex sees that I am hurt and sad, he/she will feel guilty and contact me and maybe he/she will take me back.

They might feel sorry for you.. but they will never take you back because of your sad posts.

It serves no purpose other than showing your ex that you are still not over him/her and you are weak and looking for sympathy.   Are you guilty of doing the same? 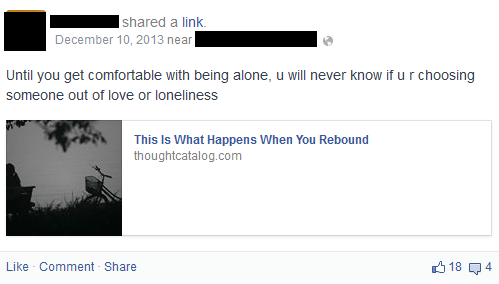 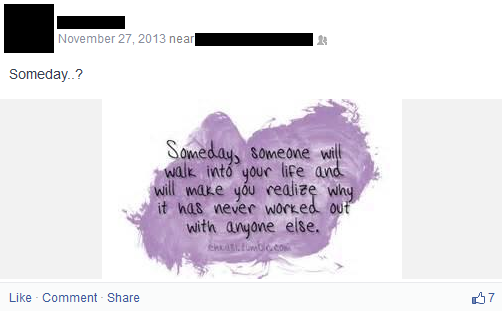 3. Don’t talk bad about your ex on social media platforms.

It doesn’t do any good if you are serious about getting your ex back.

You have to stand firm and show that you are mature about this.

There are many people who try to get their ex jealous by posting a status on their social media like:

“I’m so glad my ex is gone. I can now freely date whoever I want!”

“My new lover is 10x better than you know who!”

But not only will this NOT get your ex jealous, it can in fact get your ex to feel even more negative towards you.

You should also reflect on yourself.

Did you try to work on your relationship and make efforts to communicate with your partners and figure out what went wrong and how to fix it?

If you could start all over again, is there anything you would have done differently?

Maybe spend more time with your partner, maybe create small romantic surprises for each other once in a while or maybe just simply tell each other that you love him/her every morning?

Stop blaming your ex and start finding out what was the problem and think about what you can do to improve before you try to get back with your ex.

Are you checking your ex’s status update every five minutes?

Are you checking if your ex is online on Skype every day?

Are you checking out what new friends your ex just added and trying to find out everything about this new friend of opposite sex because you are worried that they might steal your ex away from you?

If so, this could drive your ex further away and possibly even jeopardize your chances of getting back with them.

When you start to find out obsessively what your ex is doing everyday, it will get you to become paranoid.

You will start to think of all the reasons in your head why your ex broke up with you.

This will lead you to want to justify the “real reason” why your ex broke up with you.

And if you start to get desperate, you will start to demand answers from your ex and this will pressure them and make them want to avoid you even more.

That just shows you are desperate and you are not coping very well with your breakup.

You don’t want to show that side of you to your ex ever if you are thinking about getting your ex back.

So, what is the right thing to do with social media if you want to get your ex back?

1. Exercise and buy some new clothes.

Change your profile picture to show the attractive and confident side of you to your ex.

It is very good to start going to the gym and lose some of the weight you have been wanting to get rid of since forever.

It will not only help make you more fit, but also help you stay energetic and positive.

Get a new hairstyle and a new outfit and bring the sexiness out of you.

2. Go out and have fun with your friends.

That will show your ex that you are doing well after the breakup and you are the same fun loving person your ex fell in love with.

It also serves another purpose.

Seeing these photos might bring back a lot of good memories and fun times your ex had with you and thus make your ex miss you.

3. Meet new people and go on a few dates.

Again post lots and lots of photos of you having fun.

Maybe some photos of you with your dates having a good time.

A healthy amount of jealousy might be of some help in getting back with your ex.

Remember, whether it is guy or girl, we get jealous very easily.

However if your ex does contact you, you must be fully prepared for the call and not sound needy or desperate.

Nothing negative, even if you find yourself really missing your ex and feeling horrible.

Just keep it to yourself.

No one finds negative people attractive.

5. Time to focus on your passion again.

When you were dating, your life was mostly revolved around just your partner and you started doing less things that you were passionate about or completely stopped doing it.

Now is the time to start focusing on you and things that you love to you.

When your ex sees it, your ex might be reminded of the person they first felt attracted to. 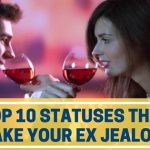 Are you looking for statuses that make your ex jealous? Before you go ahead to post statuses on your social media, it's vitally important to first … END_OF_DOCUMENT_TOKEN_TO_BE_REPLACED

If your ex has just told you that your ex just wants to be friends, lots of questions might be going through your mind right now. Questions … END_OF_DOCUMENT_TOKEN_TO_BE_REPLACED

If you are wondering, "Will he miss me if I leave him alone?"... Then you may be surprised by the answer that I'll be sharing in this … END_OF_DOCUMENT_TOKEN_TO_BE_REPLACED

Are you wondering what are the signs your ex will eventually come back to you again? If you've just gone through a breakup, then this period you're … END_OF_DOCUMENT_TOKEN_TO_BE_REPLACED

If you have just gone through a painful breakup, then chances are that you might be wondering, "does my ex miss me at all?" Or is this more like … END_OF_DOCUMENT_TOKEN_TO_BE_REPLACED

Can you use the power of silence after a break-up to get an ex back? Silence is a very powerful thing when used the right way. Sometimes when … END_OF_DOCUMENT_TOKEN_TO_BE_REPLACED